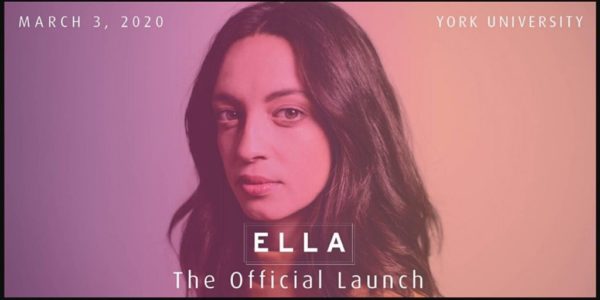 The Honourable Mary Ng, Minister of Small Business, Export Promotion and International Trade and Member of Parliament for Markham–Thornhill, is speaking at the event, along with York University President and Vice-Chancellor Rhonda L. Lenton and Jenise Lee, Founder of PurPicks and CertClean who is a York alumna.

The federal government is providing $1.8 million in funding for ELLA, led by York’s Innovation York, in partnership with the small business enterprise centres of Markham, Richmond Hill, Vaughan, and York Region. The program will also have several corporate partners; Shopify has signed on as the premier partner in support of ELLA.

“Initiatives like York University’s ELLA program help women entrepreneurs gain the knowledge, tools, and connections they need to start and grow their businesses,” said Ng. “Our government is also working to advance these goals through Canada’s first-ever Women Entrepreneurship Strategy. Together, we will ensure women-led businesses in the York region – and across the country – have access to the supports they need to start up, scale up, and access new markets.”

Launching ELLA during the same week as International Women’s Day is fitting, given the global need for opportunities and conditions for women to thrive and succeed.

“The ELLA program for women business owners is an example of York University’s focus on new educational approaches – like entrepreneurship and work-integrated learning – that equip our graduates to thrive in the competitive global knowledge economy,” said Lenton. “It is especially important that we give women access to the skills, supports and tools needed to build their businesses as part of our work to build a more gender-equal world.”

The ten-month training and support program is tailored to help the 54 women who are participating to accelerate their business growth. They will be given access to a network of other women founders, top experts, mentors and supporters. Tonight’s event marks the first time that the participants are in one room, along with supporters.

In Canada, women entrepreneurs account for only 16 per cent of business owners. For Sarah Howe, Director of Innovation York, the statistics are evidence that women business owners need to be supported. ELLA is especially targeted to women entrepreneurs in York Region because the community is considered underserved, given the region’s large geographically-disbursed population, with some rural and remote areas.

Each of the 54 women entrepreneurs owns 50 per cent or more of their business, has a business with sales and initial traction, and lives in York Region or can travel to York Region for the training and workshops.

“This program is meant for women founders who are ready to hustle and grow their business,” explained Howe. “These women will get access to a community of other women founders, mentor and experts who can give them solid business advice and more connections, everyone from better suppliers to more investors.”

When York University alumna Stephanie Florio and her brother realized that students were still applying to jobs by printing a stack of resumes and walking around the mall to hand them out store by store, it sparked an idea.

“The app has similar functionality to Tinder. Once job seekers create their profiles, they swipe right to apply to jobs and swipe left to ignore jobs,” said Florio, a 30-year-old Woodbridge resident. “I joined ELLA to continue to learn and grow my business.”

Another participant is Zuly Matallana, owner of TIARA Bliss Inc. The Vaughan woman created TIARA Shower Cap, a reinvented, patented shower cap that blocks water and humidity. She’s had a successful pitch on CBC’s Dragon's Den, was chosen as a 2019 gift pick by Good Morning America and is currently developing new products.

Cherrie-Marie Chiu is the executive director of ALS Double Play whose not-for-profit foundation was born after her brother Christopher was diagnosed with ALS. An ELLA participant from Markham, Chiu’s charity raises awareness and funds to support ALS research to find a cure.